Had a tree die from the heat.  Not sure of the exact type, but it was one of the *berry trees which are basically giant weeds.  They grow fast, always where you don't want them and have the habit of rotting very quickly when they do expire.

The idea of me up on a ladder holding a chainsaw with property very close has all the hallmarks of a farce somewhere between "America's Funniest Home Videos" and "Faces of Death" so I called an expert, if an expert is described as a friend of a friend who needs some money, but not too much.

Sherm did a pretty good job.  He cut the stump off level so it could be used as a pot holder, and didn't trample the plants that were in the flowerbed around the base.  Part of the contract stipulated removal of the debris, and I didn't see a pickup, so when I went out and saw bare ground with him carrying branches into the alley, I was sure there had been a miscommunication. 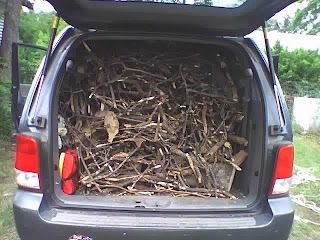 Yep.  All the way to the front.

Apparently he's just going to leave it there and burn it as he needs it.
Posted by Chris at 6:20 PM