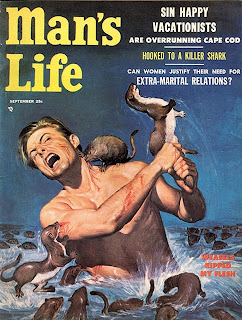 I did about ten minutes research after coming upon this painting and learned that it graced the cover of Men's Life in September of 1956 and the artist was Wil Hulsey, whose works are apparently popular amongst those who collect such things. The actual story was a bit more mundane, concerning a farmer's struggle to keep his ducks from being killed. (Perhaps not. Like a classical scholar trying to piece together a Greek play from papyrus fragments and quotes from other contemporary authors, I'm too tight to buy a digital copy of the story and must use nuggets from bloggers who have. Consequently, I think the story features a barn on fire from an errant shotgun blast and the farmer rolling on the ground choking the life out of a weasel.)

I also learned that I'm way late for this party. "Weasels Ripped My Flesh" struck the kitsch chord as far back as 1970 when it inspired an album cover for Frank Zappa, and it has popped up on the internet on a regular basis as #1 in the manly men magazine cover countdown contest.

One of the great blessings of the internet: you are never alone, and there are more people out there who like the things you like than you ever suspected. Of course the down side is that you are not that original either.