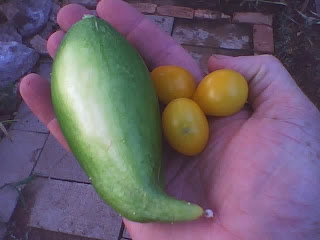 The heat has won. The last fruit I picked consisted of three tomatoes and one cucumber. There is no potential fruit on any tomato plant, but they are growing well with abundant watering. I'm going to keep it up in the hopes that in the fall they might produce. The vines are another story. All the watermelons, cantaloupe, and cucumbers would grow overnight but then die back. Despite some huge flowers that suggested I was on the right track, no vine ever stretched more than three or four feet. All it took was one missed watering -about eight hours or so- and they were dead. Not just wilted, crunchy.

It's hurting those on a larger scale too. One farmer told me keeping one alfalfa field going under one of those rolling pivot things cost him $7,000 last month. Others may pay more, but that is a lot of money to me. The cattle that didn't burn in the fires are being trucked to market as fast as they can be loaded. No one can pay to feed and water them.

Prepare to pay more for beef. Any excuse to send prices up will be used.