Trick Question: What Is This Man Doing? 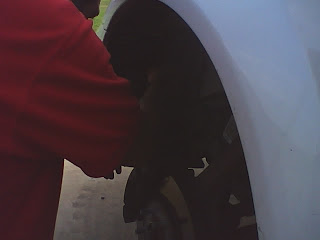 He's changing the battery, of course.

I had a VW that had the battery under the rear seat. It made sense, because the engine was in the back. All you had to do was lift out the straw stuffed seat and there it was. You did not have to REMOVE THE TIRE. I also had to buy a package of those push-in plastic screws because you know half broke while removing the liner. It was actually a pretty easy battery to replace once the tire was off; there was even a helpful "Battery Here" message on the liner.

I wasn't the only one taking photos either. The staff of the parts store had to come out and gawk at the operation, and a few customers had to come by and tell their horror stories as well. It didn't make any sense. I couldn't see any reason why the battery couldn't be under the hood.

This is the second surprise I've had from this car. I'd bought a small freezer and since it wouldn't fit in the trunk, (it's like a Chris cubit tall and deep) the salesman was helping me strap it in. The car manufacturer was helpful enough to foresee my predicament and provide some small recessed loops for you to hook you straps into. Start tightening the strap and the whole thing pops out. Look, glue! The hole left behind was the perfect size to hook a strap to, though.

*I loved the simplicity of the Beetle. To change the motor you needed a wrench, a jack, a pile of railroad ties, and a couple of friends to pick up the rear of the Beetle and throw it over the engine.