Yes Virginia, You Can Run A Country On Unicorn Farts.

For an election that didn't change the presidency, the House or the Senate, this was probably one of the most historic elections of all time.  Ideology has now triumphed over reality.  We are now a corrupt banana republic continent sized Greece, and no one cares.  The people have spoken, and this is what they want, as long as someone else pays for it.  If I were the Republicans, I would think for a while about making a hard step to the left, and giving America what it wants in spades, then forming a new party to clean up the mess.
Posted by Chris at 9:55 AM 2 comments:

Yeah, it's a day late but I felt I had to do something.


From Shawnee, Oklahoma.  One of the many places across America the Oil Company accidently drilled a hole to Hell.

Halloween really snuck up on me this year.  I had plenty of warning of course; I've been looking at Halloween merchandise since August, but things just haven't looked Halloweeny.  The radio stations kept to their usual playlists, and I really didn't see that much on TV.  (Don't watch much at all though.) The trick-or-treaters were out in force and the local zombie walk looks like it is on it's way to being a tradition.  Still, there were fewer lights on, everyone was home at seven, and the local preacher didn't bother to publish his "Halloween is Satanism" (using the World Book Encyclopedia as primary reference) letter in the paper, and no one decorated.

Don't know what it is, or if it's part of a trend.  I'm sure the economy, uncertainty about the future, and Sandy all played a part.  On the other hand, what was once exclusive is now everyday.  In entertainment, we are pretty much flooded with vampire and zombie TV shows and movies.  Erotic vampire romance has taken the place of Nick Carter and Mack Bolan on the supermarket book shelf.  There are also ordinary people.  Pinhead used to be kind of scary, Now, well, I'm sure someone is working their way up to it as an expression of individuality.  Basically, if Americans are walking around looking like extras from "Apocalyptico" everyday, you really can't dress up any more than that. 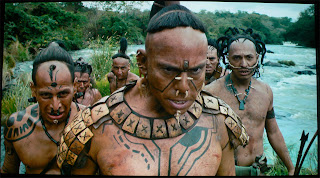 Disclaimer: I don't care if you are into body modification, tribalism or whatever they call it these days.  It's your business.  Just don't ask me for a job or to pay your unemployment when you can't get one.
Posted by Chris at 8:50 AM 1 comment: