I'll Tell Your Aunt Hill You Won't Make It To Dinner 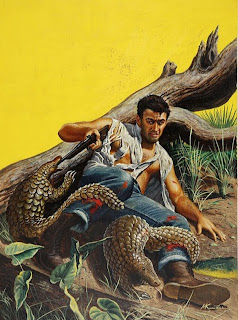 Kudos to the individual who collected these priceless treasures in his basement until the computer age allowed them to be shared with the whole world.

I guess by the late 1950's they were desperate for an animal, any animal that hadn't been featured on the cover a half dozen times. Pangolins though. I mean, really? That is one animal that just wants to go about its business without hurting anyone until a tourist decides a photograph of little Johnny riding it is just the thing to show the folks back home.

Still, I'm sure the Termite-People were grateful.