Cuz That's The Way We Roll

My store's electrical problems are well known, but they keep getting worse, because more is being plugged into the same circuit. Last Spring, a tech gremlin came out and took a survey, declaring that we had to have some telephony work done as well as having a new power outlet put into the office. He called his boss, and his boss made him put him on speaker so everyone could hear him telling me to call maintenance to get it done. I probably hurt his feelings by laughing at him, but I did as he asked. Last week, a very different gremlin shows up. Do they have migrant technical workers? They must, because this one drove around in an old battered school bus with an air conditioner stuck in the one window not covered with kitchen curtains. Nice fellow though.
Anyway, he promptly plugged in a bunch of new equipment... into the same circuit the office lights are on. The ones on a motion detector. HQ keeps calling (on my cell phone, because the store phones are dead) wondering why everything is registering "off". The migrant tech worker has been out a couple of times, standing in a lit office explaining to someone that everything is working on his end.
Fine sport, but it is trouble when your registers go into standby mode every ten minutes if no one is in the back filling out paperwork. Got back from a day off, and discovered that someone has tried to fix it for us: 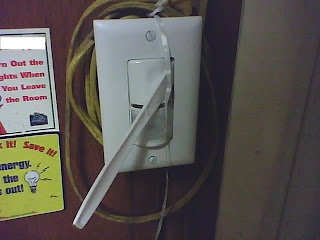